Cracking – Is it Serious?

A number of factors can cause cracking in your home – in the majority of cases though, cracks are caused when the ground underneath the house dries and contracts, causing the footing of the house to shift unevenly, leading the walls to move and crack.

Extended periods of dry weather can cause existing cracks to widen and new ones to appear. This is particularly an issue in Australia, where large parts of the country are in the grip of long-term drought.  In fact, last year was Australia’s hottest and driest year on record.

The foundations of your house can be affected by changes in temperature, moisture and loads from the structure above.

Foundations consist of either ‘reactive’ or ‘non-reactive’ material. Reactive soils are the clay soils and black earth which are known as plastic because they shrink or swell according to the level of moisture content. Non-reactive soils are sands, silt and gravel. These materials don’t suffer moisture changes but can be susceptible to load-bearing failure.

Up to about 90% of all cracking in houses is due to changing water content in reactive soils and subsequent ground movement. Some of the main culprits are:

The root systems of trees and shrubs draw on the moisture in the foundations and cause the soil to shrink and settle. This in turn creates movement in the house structure and subsequent cracks in the masonry or brickwork. When you remove established trees and shrubs, the foundation soil will reabsorb lost moisture and start to expand, again creating movement.

Saucer effect due to long dry summers and cold wet winters – external walls of the building rotate inwards at the top, internal walls develop cracks and floors become spongy as the sub-floor structures sink below the supporting bearers.

The run-off from raised street and footpath levels, stormwater or blocked and leaking downpipes can cause washout of the soil or foundation saturation.

Excessive watering of your garden by garden sprinkler systems close to external walls can cause problems, as can blocked or leaking downpipes and stormwater drains.

Vibration damage such as that caused by earthquakes, heavy traffic or from significant earthworks can cause foundations to move if the vibration is severe enough. Cracking would occur as a result and show up irregularly in the building structure.

Other factors include uneven settlement, ageing and poor structural design or workmanship.

Cracking is generally defined by its physical appearance – it can be classed as horizontal, vertical, stepped, cogged or a combination of these.

Here are some visual examples of the different types of cracking you may see in your home:

Here are some visual examples of types of cracking that Home Inspection Hub clients have encountered:

Fine or Hairline Cracking (often seen in concrete and driveways): 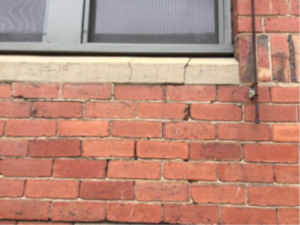 How Do I Fix Cracking?

The Guide to Standards & Tolerances (VBA 2015) outlines the size and description of cracking, and what measures to take (if any) for rectification:

Damage to Walls caused by movement of Slabs and Footings, and other Causes*

There are two approaches to cracking – doing your best to prevent the problem from occurring or becoming worse – or dealing with the cracking once you have found it.

If you’re unsure how to deal with the cracking at your property, contact The Home Inspection Hub. One of our qualified inspectors can ascertain the cause and extent of the issue and offer professional advice on the best way forward.

Have you noticed something that looks like this on the brick or concrete areas of your home? Perhaps the report you have received after a building inspection mentions the term ‘efflorescence’ and you’re not sure what it is. We will look at what causes efflorescence, how it can be treated and prevented. Efflorescence is a …

Are you house-hunting? Viewing a potential property several times before you make an offer is part of the due diligence all buyers should undertake. Attending several inspections will help you identify obvious issues and determine whether the property is the right fit for you in terms of location, size, position, feel and style. However, there …