Are you thinking of investing in property in 2020?

Whether you’re an experienced investor or making your first foray into the world of investing, it pays to do the groundwork by researching areas which will provide a solid return on your investment.

Areas about to undergo gentrification (also described as ‘renewal’) are also like to rise in value, providing you can get into the market before demand pushes up prices.

Regional areas with good commuter links are set to be the next boom areas for Victoria., Bendigo is benefitting from a surge of buyers who have been priced out of Melbourne, who are looking to be within a two-hour commute of the city.

Median house prices in Bendigo are still around $370,000, with rental yields in the 5% range.

Growth-boosting project such as the recently completed Regional Rail Link and proposed expansion plans for Latrobe University mean that Bendigo meets many of the requirements for an area with strong growth prospects.

The Latrobe Valley has several locations where median house prices are still below $200K, and has strong agricultural, timber and manufacturing industries. West Sale Airport will be upgraded to house the Australian Defence Forces basic pilot training facility, and a world-first coal-to-hydrogen plant will be built at Loy Yang, with the pilot phase in operation from 2020-21.

The municipality of Darebin is a bustling metropolitan hub around 15km north of the Melbourne CBD and would suit investors with a long-term outlook for growth in house prices. Rental vacancies here hover below 2% and the average annual growth in median house prices has typically been around 8% over ten years.

Historically a blue-collar area, Darebin is an example of the creeping gentrification of parts of Melbourne, with a decrease in blue collar jobs over the last decade. The area is expected to see an influx of government services, employment opportunities, housing and public transport options as a part of the State Government’s Northern Major Activity Centre infrastructure.

Which Melbourne Suburbs are Top Performers for Capital Growth?

CoreLogic’s 25 Year Property Trend Report has compiled data on the change in median prices across Melbourne suburbs from 1993 and 2018.

Have you invested in property in any of the following areas in the past decade? If so, you will be enjoying the capital gains that have seen these suburbs classed as top performers: 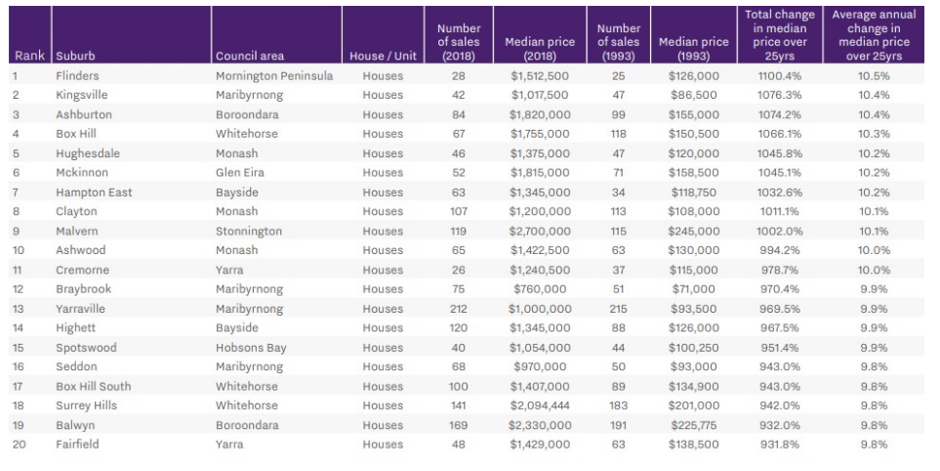 Are you investing, downsizing, upsizing or just looking for a change of scene? The Home Inspection Hub can help you make one of life’s biggest decisions by conducting a pre-purchase, pre-sale or new home construction inspection.

Our inspectors cover all areas of Melbourne and surrounds and will send you an electronic report within 24 hours of your inspection. Our inspectors are fully qualified and insured, with a wealth of knowledge and experience.

Call us today on 1300 071 283 or click here for a quick online quote.  We look forward to helping you on your property journey!

Are you on the house-hunting trail? Spending all of your free time looking for a home? A real estate inspection only gives you limited time to view a property. Serious faults and defects may not be apparent at first glance. What are some red flags that mean you should just walk away? We asked our …

Have you noticed something that looks like this on the brick or concrete areas of your home? Perhaps the report you have received after a building inspection mentions the term ‘efflorescence’ and you’re not sure what it is. We will look at what causes efflorescence, how it can be treated and prevented. Efflorescence is a …